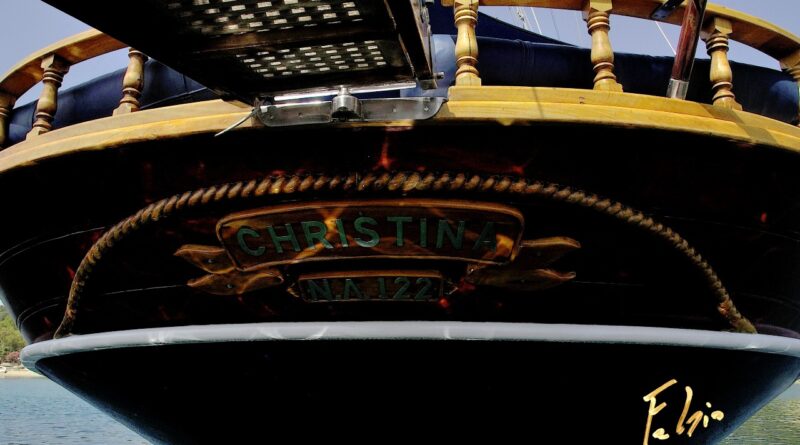 The first time I noticed the beautiful Ms Christina coincided with my first trip to Lefkada.
To be honest my destination was Meganissi, at that time still wild and almost unknown.
To get there I had to embark on a barge from the port of Nydri and there I saw Her, beautiful and elegant.
I read her name written on her transom, her two masts and her slender profile.

She was the embodiment of my dream boat, one that you would want to live on.
I dreamed of climbing aboard and seeing her from the inside, in the privacy of her warm wooden planking.
A dream that only came true many years later.
She floated regally in the still atmosphere of the Lefkadian off-season.

That journey continued to the discovery of that delightful pearl that is Meganissi, but I will write about that another time.

Years later I returned to the island, I was no longer a boy and I had partly settled down, I was as usual with Alina and our dogs: Tarallo, Bibi and Pepi.
We passed by Nidry and there she was.
A beautiful English girl was smiling at those who, like me, were standing there admiring the vessel.
Then what I had dreamed of years before happened: I was invited on board.
I walked down the gangway with the respect that every sailor reserves for a Lady of the Sea, then I went below deck and beauty invaded my senses.

The scent of freshly varnished wood, the narrow corridor leading into the belly of the ship, the doors to her narrow, cosy cabins and
the small bar and the kitchenette.
“What else would a sailor need to live happily?” I thought.
I said thank you and left excitedly, the season was just around the corner and, as it should be, I left room for those who saw it only as a daily entertainment and not for what it is: a boat with a noble soul.
When I moved to Lefkada and started working there, I had another encounter with M/s Christina.
I saw her “grown up”, just like the girl who greeted me the first time she had become a woman.
It was only later that Stelios, the owner and captain, explained to me that he had made her “longer” by two metres! Improving habitability and balance.
I don’t know how many years of life Stelios must have lost watching her cut in two.

I would have had three strokes at the same time.
While looking for clients for Lefkada Official, I received a reply to an email sent to the Babis Hotel in Nydri.
It was signed by Jane Flinders who said she was representing the Hotel, Marine Adventures and.…

Ms Christina!
Now… we were just starting out, hardly anyone knew us in Lefkada, we had only been living there for a few months so I think you can imagine the excitement.
She arranged to meet me at the pier in front of the Babis Hotel.
I arrived well in advance and there she was.
She floated soaring over the water like the most beautiful of mermaids.

A cute little dog barking greeted me, and looking on board I saw a sailor lovingly tending the planking, stroking it with a brush.
It was none other than Stelios, the Captain!
Then from the small Saint Nicholaus, the ancient cargo boat moored on the other side of the pier, Jane jumped out.

It was her. The girl who welcomed me aboard Ms Christina years before.
She introduced me to Captain Stelios, her husband, and together they showed me their beautiful creature.
I caressed her excitedly, I said “hello Chris…welcome back..”.
She answered me with a complicit smile.
As I wrote in my story about my boat Nitroglicerina, we sailors have this ultra-sensory ability to “communicate” with boats.
And not only with them.
It was love at first sight between me and Ms Christina and receiving an official invitation to visit her exclusively was a great honour.
I was there on business anyway… we closed the deal in 46 seconds.
I always thought Chris had a hand in it.
At the beginning of the season, I was invited for the opening tour.
Have you ever lived a day on M/S Christina?
No?
Too bad…because it’s one of those things you’ll remember for the rest of your life.
You embark from Nydri, where the friendly crew welcomes you with a sincere smile and puts you at ease.

The number of guests per trip is limited, so there is never a shortage of space on board.
Each guest has a comfortable, padded bed at their disposal.
The kind you’d feel in your own bed at home….
The crew walks around offering coffee and orange juice.
Captain Stelios starts the engine, the crew pulls up the gangplank and the sailors let go of their moorings.
Christina steps off the dock and the dream begins.
The scent of the sea inebriates the nostrils, the swallows leave the nest from the cockpit to begin their day of hunting, they will return home in the afternoon, at the berth…

Stelios and Jane’s son is in the cockpit, barely a teenager he is there, at the school of life with the best teacher you could wish for. Your father.

Travelling on Christina means travelling as a family. And as in a family you feel at home, pampered and revered by those who make a living at sea.

The engine revs up and Chris advances proudly and happily, another day at sea… and goes off humming… just like that.

The first stop is one of the historic ones, the famous cave of one of the most beautiful islands of the Ionian Sea: Meganissi… yes, that’s it.

On its jagged eastern side is the cave of Papanikolis. With its cobalt-coloured waters and rocky seabed.

After this stop, the day resumes with a wonderful sail to a remote rock in the middle of the sea. The incredible Formikula island.

On this islet between Kastos, Kalamos and Meganissi lives one of the very rare families of Mediterranean monk seals.

The water is unforgettable, it is almost frightening to dive in because the seabed seems to be only a few centimetres deep. It’s several metres, but the refraction of light due to the clarity of the water plays tricks on you.

Swimming in Formikula is a once-in-a-lifetime experience.

Heady and refreshed, lying in the shade on a comfortable sunbed, the coast of Kastos begins to flow to your left until you reach its characteristic little harbour.

Kastos is a sleepy, delightful little island, waiting to be discovered. The stop allows for a stroll through the narrow streets of the village, with plenty of time to stop for a coffee at the harbour bar.

Once you’ve seen it, the desire to return will creep into your mind like a woodworm.

It is the authentic Greece, the one we all dream of.

The journey continues along the east coast of the beautiful island, at the tip of which we head for its big sister, Kalamos: the green island.

High, steep and lush, it is another of those pearls that will remain in your heart.

After a stop in a lovely bay for a buffet, the trip resumes.

Chris slices through the waves proud and sure, Captain Stelios expertly manoeuvring her as she glides through the crystal clear waters.

At the northern tip of Kalamos a dream beach suddenly opens up before your eyes.

It is the beautiful Asprogiali.

Since time immemorial, a caravan that arrived who knows how has been part of the landscape.

There are no traces left of the lucky owner, who must have experienced moments of true bliss alone on this remote and wonderful beach of fine sand.

The stop is long, allowing you to go ashore, rest and lie on the sand while the gentle waves of the Ionian Sea lap at your skin.

It almost hurts to get back on board, but a lifetime is not enough to enjoy the beauty of the archipelago and in one day M/S Christina tries to give you the best possible taste of it.

It’s not for nothing that the next beach is the famous Barberezu. Mentioned even by Homer, it has an ancient thermal spring inside.

Now while you are there, just think about the fact that Ulysses, one of the greatest and most famous sailors of all time walked right where you are.

Time to realise that you have had a mystical experience and you are on your way to Skorpios, with its history, its past and its present.

Apollo begins his descent to the west and Chris chases after him, sailing towards that golden disc and arriving in the protected harbour of Nidry.

And as you finish sipping your Chichi, Lefkada’s finest cocktail which takes its colour from the island’s sea, you’ve reached the end of a day that you’ll never forget, but rather look forward to reliving.

Because you may not know it yet but.. that’s what Lefkada is.

A bit like the Hotel California sung by the Eagles.

You can enter anytime you like, but you can never leave… believe me… I know it well.

2 thoughts on “A Day on M/S Christina”