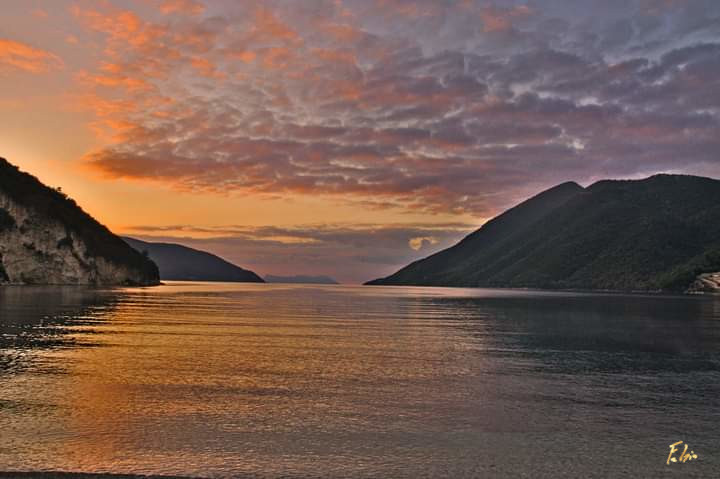 The wonderful beach of Dessimi.

This beautiful bay facing south was the destination of our little trip today.
To reach it you have to pass Vliho bay (if you are coming from Lefkada town), and after a lonely bakeri there is a small road on the left that leads both to Geni and to the beautiful Dessimi.
Following the narrow road you come to a fork where if you turn left towards Geni, the beautiful church of Agios Kiriaka and the monument to Dropfield, but more on that another time.

Today, however, we turn right, climbing up the hill from the pass where there is a breathtaking view.
On the left Vliho bay, with its boats at anchor and its incredible colours, on the right the entrance to the bay of Dessimi with Atokos in the background.
After the pass, the road descends steeply down the south side of the hill until it reaches the Santa Maura campsite and from here, keeping to the right, you come to a small road facing the sea with a small car park and some tavernas.

Along the cemented road you are greeted by the happy little feline colony of Dessimi.

A dozen or so cats will meet you, accustomed to associating the arrival of any vehicle with food.
In fact an admirable English lady who decided to move to the island, looks after these kittens who will entertain you by purring and playing with you. The result is a nice video that you can watch on the youtube channel Lefkada official. (video)

I have lost count of the number of times I have come here to fish in winter.

For a while Alina worked privately as a social worker for a foreign family living not far from the bay and every day, after dropping her off at work, I would go down to the beach to enjoy the peace of the Winter and cast a few lines with my spinning rod.
At other times I would walk to the west end of the bay, from there it is more of a surf casting or fixed rod fishery.

In Spring the bay is buzzing: activities start to prepare for the upcoming season and Spiros sets up his jetties from where we set sail on our adventures to the neighbouring islands.
For a while I lived in Geni, a stone’s throw from here, in a small, isolated fishing community. In the sense that for someone from Geni, if you live in the mountains, you are a foreigner. Anyway, when I lived there Dessimi was a regular afternoon stop.

In Summer it becomes a bit more complicated. The beach is swarmed by the customers of the two campsites in the bay and finding a quiet spot is a utopia.
But it is still the starting point for our daily excursions by dinghy.
In fact, Dessimi is home to Dessimi Boats. Spiros Palmos and his father have created this wonderful business in one of the most strategic locations for sailing to Ithaca, Kefalonia and the neighbouring islands.

The security of coming home with your bow protected by the island, a natural barrier to the high winds that break on the west coast, is something you can only experience in a few places on the island.
And Dessimi is one of them… it welcomes you into its arms, stretching out in front of you a tongue of flat sea that the Mistral cannot ripple.

In Winter, the peace that permeates the beach is surreal.
The silence is deafening: the waves gently crashing on the sand and pebble shore, the meowing of the kittens, the singing of the birds and the wind in the branches of the trees..

Looking south you will see Atokos, one of the most beautiful pearl of the Ionian.

We have visited Atokos countless times in the summer leaving from here on one of the fast Spiros’ dinghies.
Today, however, the jetty with its boats and flags is gone, and neither is Malu, Spiros’ beautiful sweet little dog.
Today there is no one…

The Sun descends to the west behind the hill and dyes everything pink, then red, and Dessimi becomes magical, captures you with its unique, irresistible atmosphere and connects you with the island, makes you become part of it, and all of a sudden you feel lucky.

because you are experiencing something surreal, intense and mystical;

because the island has given you permission to live and feel it.