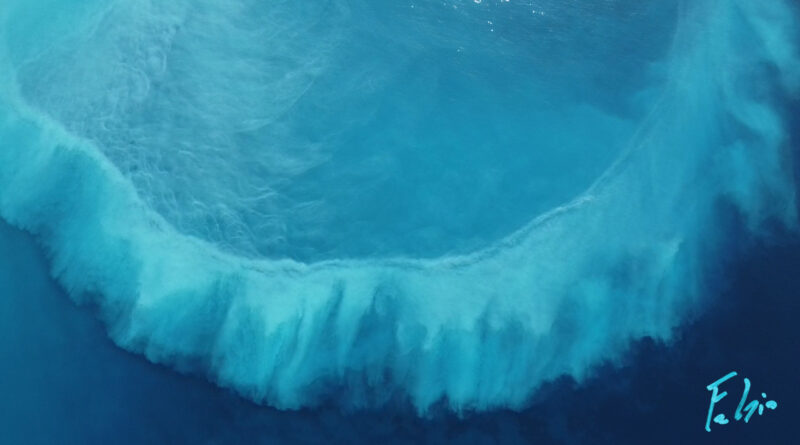 One of the most beautiful beaches in the world, Egremni was in danger of disappearing forever after a violent earthquake drastically reduced its sandy shoreline.

But this only increased its charm and the mystical aura that surrounds it.

The earthquake took away the stairway carved out of the rock that allowed people to reach it by land, and for years it could only be reached by sea.

At the turn of the century, a new staircase was built, but only for the faint-hearted.

Egremni is immense, very long, and behind the rocky ridge to the south it becomes Wild Egremni, reachable only by boat and frequented by nudists.

The colour of the water is the classic Lefkada blue that has made the island so famous, that blend of indigo and various shades of blue that make the sea glow, as if it were shining with its own light.

In Winter the shade of blue reaches the apotheosis of magic, so much so that it inspired me to make this video, one of the most successful on the Lefkada Official YouTube channel, which encapsulates the essence of Lefkadian blue, of which Egremni is the best representation. 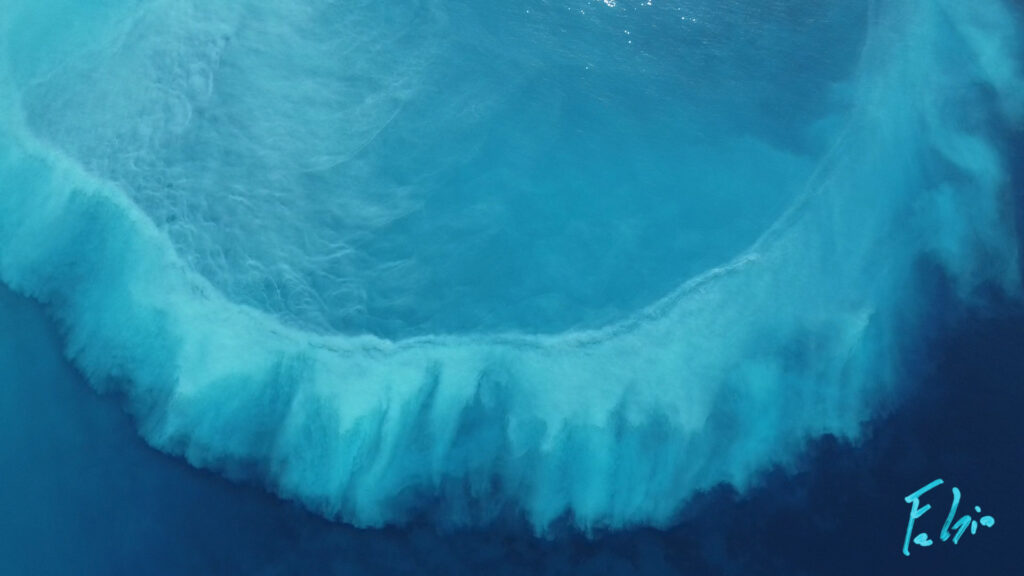 It’s not easy to get to, starting from the capital you climb the beautiful coastal road that runs west of the island.
You pass the delightful Agios Nikitas, once a typical fishing village, and continue uphill through olive groves and villages where you can still breathe in an ancient atmosphere, where the roads are so narrow that at times you feel the need to close your mirrors as you pass between one house and another.
In some places you can see the damage done by the earthquake, abandoned buildings with obvious cracks, ruined roads, collapsed rocky ridges.

But then you look to the west and think that perhaps Paradise is not just utopia, and that perhaps in ancient times the Olympian Gods inhabited this mythical place.
Suddenly, an old sign with Egremni written on it makes your pulse race, you know you are close to one of the most beautiful beaches on the planet.
There is a solitary taverna at the junction between the main road and the ribbon of asphalt that will take you down to paradise, tastefully furnished and with a terrace with a view to be framed.
Then the road begins to descend to a gate that bars the way….

My first time in Egremni was many years ago, it was late Autumn, the road had collapsed and there was a huge earth moving machine abandoned on the site.
Roads collapse quite easily here, the earth is friable and tremors are very frequent.
I was with Alina and our dogs, and we continued for a few more kilometres until we reached a small clearing.
We had to hold on to the trees because of the slope, it was almost sunset and the November light was the kind that makes you dream.
We looked down and our breath caught.

wild, immense, mystical. The scents of thyme mixed with eucalyptus and salt, the unmistakable scent of maritime pines, with their barks releasing perfumed resin of which I carried a sticky memory on my hand anchored to the tree, at the limit of balance.
The sadness of not being able to go any further down… blended with the happiness of seeing nature take back its space.

The view from the top is one you will never forget, something that enters your soul as every hair on your body stands on end. 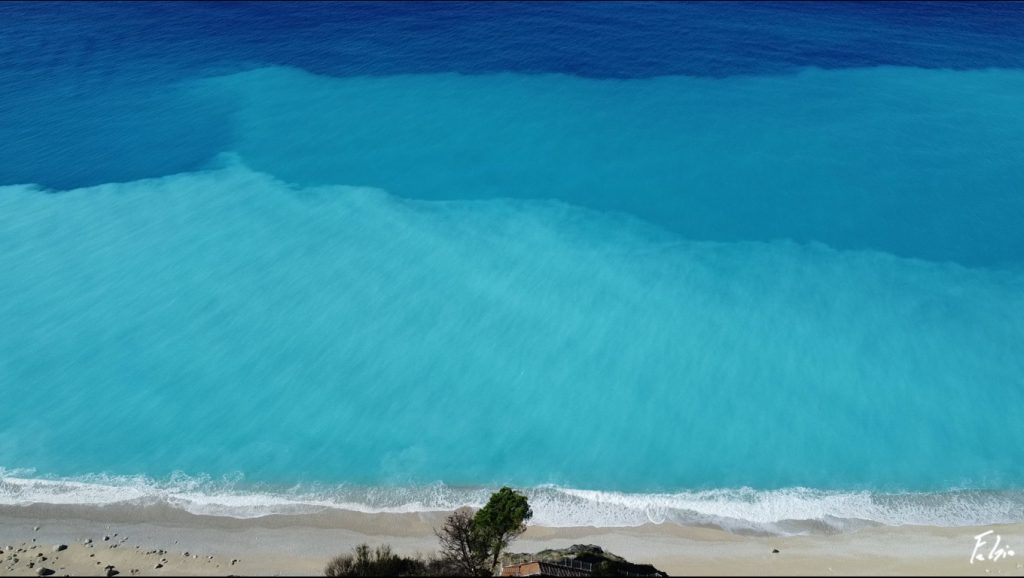 Today the road stops exactly there. All you have to do is park in the shade of the majestic pines and walk a few steps westwards to find this clearing, which has suffered a few more landslides than a few years ago.

Beyond the gate the new road pantomime descends again, after a few hairpin bends to be covered preferably with a quad bike, you arrive at a square where at most 7 cars can fit tightly together and a thrilling descent begins.
The new staircase is frightening, anchored in the friable rock.
At times, as we descend, it is still possible to see the remains of the old staircase carved into the rock. It makes you wonder how it is possible to build a new structure anchored exactly where the old one collapsed….
I wouldn’t want to be there in summer, climbing up one of the 300-plus steps with the Sun at cremation temperatures and hoping that a tremor doesn’t strike just then.
No Egremni that’s not it.

Egremni is an expanse of blue Lefkada that at one point opens out onto a tongue of pebbles under a ridge as white as talc.

This is the view that opens up before your eyes when you reach it by boat, preferably under sail, with the lapping of the water beneath the hull, the melody of the wind in the rigging and the song of the birds welcoming you to Paradise.

Egremni have to be conquered by sea, when once the boat has been secured at anchor you can reach it by swimming or in a dinghy and the last few metres are spent walking along the shore in bare feet. Here, especially out of season, you have the feeling of being in connection with the wild spirit of the island and your senses come back to life, amplifying their receptivity: the view sweeps westwards towards infinity, with the waves breaking long and thunderous on the pebbles, singing the sound of the sea. 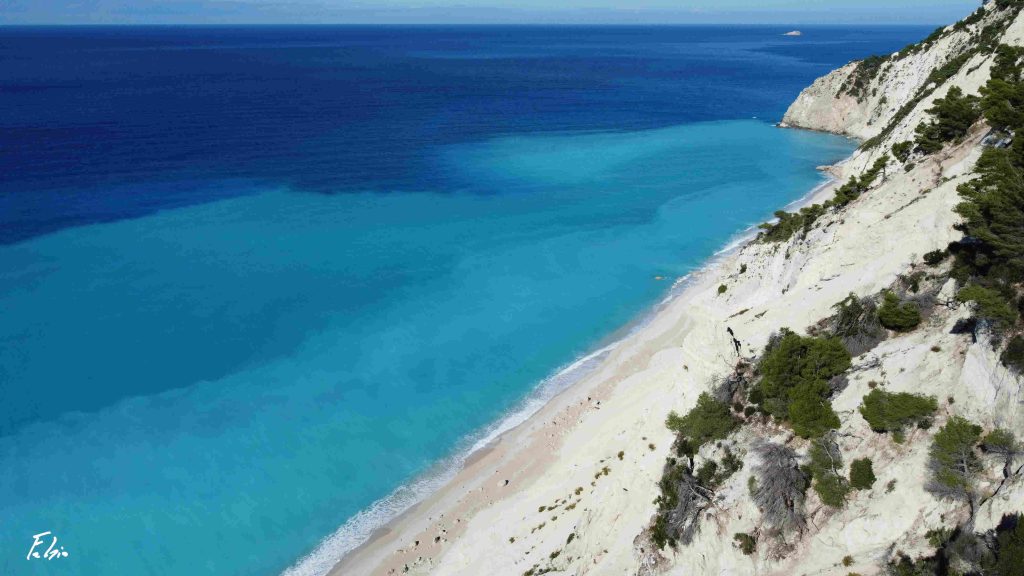 And again the scent of thyme, the salty taste on your lips, the contact with the bare earth and the feeling of not being alone in walking on that eternal beach, accompanied by an invisible but tangible presence, which your sixth sense finally awake will perceive.