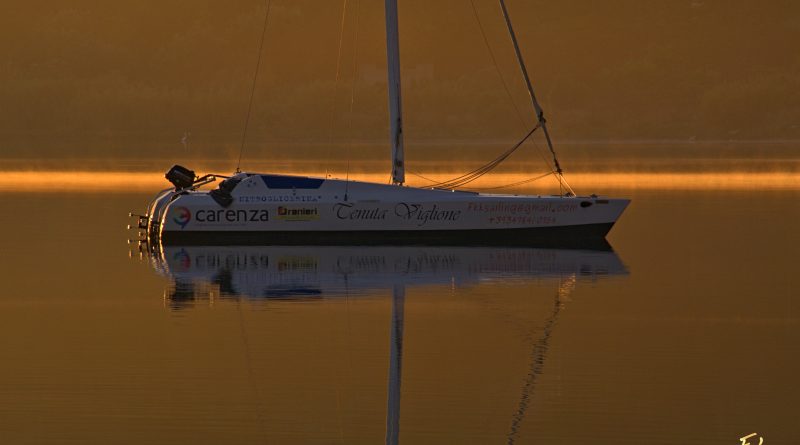 Also known as Geni bay, although only by the tiny community of Geni, the more appropriate name given to it by the British community is Velcro bay. Nothing could be truer, once you’ve seen it you never leave, no way.

I came to Vliho bay by chance, I don’t even know how many years ago, on foot from Nidry.
There was an event or a sponsored happy hour, but I arrived late, it was dark and you couldn’t see much.
I went back the next day, and the bay was revealed in all its beauty.

Boats that had come miles upon miles lay moored in the English way.

A one-fingered gentleman with a thick British accent was working on a wooden mast of a sailing boat.

Lying on two trestles, he was enjoying the care of his master, who was levelling it with a planer and removing the old, dull varnish. It was Mike, I met him years later and told him how much that single vision had influenced my idea of the island.

You could breathe in a maritime atmosphere to the point of saturating your lungs; the saltiness of the bay mixed with the scent of wood and a touch of paint…. The only thing missing was the smell of caulking, but the shipyards were a little further north.
I looked out over a catamaran I thought I knew.
The name had changed but not the colour, and not the rig, modified from the original design by Bill O’Brian. An Oceanic 30, unmistakable, iconic, and yes… it was him.

I had spotted him on a page of catamarans for sale and recognised him.

I took a photo with my reflex camera and from inside came a very likeable Scot.

He soon inspired my sympathy and, in keeping with Scottish tradition, he invited me on board for a drink showing me the boat he had just bought and soon put up for sale.
To tell the truth, he had a knee brace, I don’t remember which one but it doesn’t matter, the fact is that I never saw him or the boat again, I never knew if it had any problems or if it was simply sold by its new owner because he had the problems.

I came back to Vliho bay a little less than ten years later to celebrate Alina’s thirtieth birthday with a trip.
Vliho and Lefkada were a stop on that wonderful trip that kept us busy for several months.

At the end of the bay there are several wooden benches, very inviting, one of them in the shade of a poplar tree.
We parked there and sat down on the bench to watch the sunset.

The view was to the east, so it wasn’t that typical Lefkadian sunset you can enjoy on the west coast, but one of those that light up the bay of Vliho a la Van Gogh. The birds gliding low over the stillness of the water, the fishermen’s boats floating peacefully after the last fishing trip, I thought it would be nice to have a sailboat and keep it there, anchored in the bay, in front of the bench.

We slept there that night, camping in our minivan, or rather, now that I think about it, it was a Fiat Doblò, the legendary vehicle that would accompany us for more than five months in the Canary Islands.

Dawn arrived grey and leaden, and a girl, perhaps anchored in the bay for the first time, was unsure whether or not to go ashore with her dinghy, perhaps believing she would have to pay some tax.
Eventually she plucked up courage and moored her small rubber boat.
She greeted us with a smile and went on to the tiny mini-market, where once you get inside, you can’t get out… engrossed in an endless conversation with the elderly owner.

We left Lefkada physically, but we carried it in our hearts.

On the last leg of a wonderful clockwise journey around Greece (camping off-season in our minivan, always and strictly free camping) we returned to Vliho bay and looked excitedly for our bench.. It was occupied by some local ladies, who spoke in an incomprehensible manner.
We took the opportunity to take a walk and admire the boats moored there. Not luxurious boats, but lived-in ones. People from England and northern Europe had decided to sail there and stay.
There is also a small yacht club, the same one that advertised the happy hour that made me walk from Nidry to Vliho years before on my first visit.
On our return the bench was free, we sat down, hugged each other and it was comfortable, cosy. We watched the sunset tinting the bay pink and a thought arose in unison in our minds.

“I wonder how our boat would look at anchor here, quiet and protected.”

A year later we sat at that same bench, and our catamaran Nitroglicerina was there, floating in front of us at anchor.
Sometimes dreams do come true, in my case I may have been lucky since this happens very often, but as a great commander once said:

always be careful to leave a few dreams in the drawer, otherwise the nights without dreams become monotonous.

We moved to Lefkada.

The first summer season was spent in a yard, also in Vliho bay, where Nitro was moored during the Mistral storms that so often characterise the Lefkadian summers.

Every time I came back from my daily excursions, Alina was there, like a lighthouse signalling the way back, between our two wagging dogs, Bibi and Pepi.
And when evening fell, and the building site emptied out, leaving everything for us, the two hills to the south stood out against the pink sky, and with a bottle of Nisia we sat on a tree trunk, entranced by such beauty.

Winter came, it was our first Winter in Lefkada, and another two years had passed. Nitroglicerina floated in the bay, holding the anchor chain.
Every day after leaving Alina at work I would walk with our dogs along the bay’s waterfront, enjoying the glittering colours of dawn.
One of those days, and it never happened again, the sunrise was liquid gold. I photographed Nitro with that backdrop, and that picture ended up in my first island calendar.

A colour I had never seen before, sky and sea were fused together. I can tell you now, that photo ended up in May, but I took it in December. I put it in May because Nitro looked so eager to set sail, as she usually is in May before the season.

Velcro Bay, beautiful when you see it coming down from Vassiliki, or when you climb the hill leading to Dessimi, and reach the pass, looking North West you see it there, with that shape reminiscent of a mother’s womb, which for years has protected generations of fishermen from winter storms.

Nitroglicerina is still there, close to the shallows, strong from her low draft, anchored firmly in the mud of the bay. And when I sit on my bench and look at her, she smiles at me.